Cushing's - Syndrome In Dogs is Problem!

Cushing's syndrome was brought to our attention by Harvey Cushing in 1932. He learned of a disease that cause a large amount of cortisol was elevated in people.

Cortisol is a natural steroid that's responsible for regulating body functions. In 1995, it became known as hyperthyroidism, or Cushing's disease.

There are three ways for a dog to get cushings disease. Number one way is and adrenal malfunction, which 20% of the cases of cushings disease in dogs. It is usually one tumor in adrenal gland. The gland will become a large or very small.

A veterinarian usually prescribes Trilostane to improve the problem. Studies have indicated that 50% of dogs may have to be operated on. The risk are considered high, because the immune system is in such a low state.

The second reason for Cushing's syndrome is pituitary gland issues. In most cases, studies have revealed that 80% of dogs have a tumor  in Pituitary gland. Surgeons rarely operate on dogs for this problem. The risk are much too high to even consider this. They prescribe Trilostane,LDeprenyl,hydrochiride,Lysodrene and Ketoconzole.

The Side Effects Using These Drugs!         Side effects for Deprenyl !

Also something to consider it is very dangerous to use Deprenyl with tick collars and Mitaban dips!

The third reason for dog to get cushing's- syndrome is latrogenic. A veterinary will prescribe a medication for skin disorder.

The vet gives your dog too much cortisol in the prescription. The results the cortisol causes the Pituitary gland decrease the amount of cortisol into the bloodstream.

The cushing's problem can be stopped by lowering the dosage of the medication. Studies have shown that your dog will be dependent on the drug. So it would be dangerous to discontinue it because we had with drawl affects.

Bleeds Of Dogs At Risk For Cushing's Disease

Dogs that are at high risk of Cushing's Syndrome

Studies of this to this disease have revealed that dogs over five years old will get it. The studies also revealed that females are more likely to get adrenal gland tumors.

With Immune System Down And Susceptible To Other Diseases! 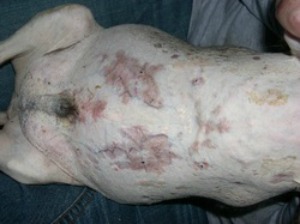 With the immune system in a bad way with Cushing's- syndrome disease. Hyper extension has been reported in 50% of dogs

I recommend a diet that can improve the situation vastly. And it is very easy to follow.

* Brown Rice use and 6 ounces of water ! 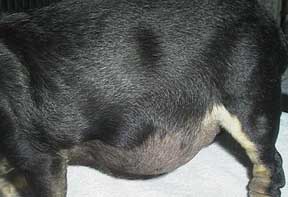 The next subject is a very controversial, but very true. It is dictated by greed and not caring about pets. The truth of the matter is a dog immune system has memory of the first vaccination it got the first year.

It will produce enough antibodies to help  fight off any disease It has to deal with. In reality, the booster shots disrupts the dogs immune system to a point where it becomes useless to the animal.

The establishment will tell us it's only a coincidence that your pets get sick after taking booster shots. There is evidence with books like Stop the Shots by John Clifton. If you don't believe me. Like I mentioned before about certain breeds of dogs, you don't want their immune system compromise in any way.

In order to best help your dog with Cushing's Disease, I recommended using Cushex Drops

Chick here to take a look at their store or simply chick the image below to browse their options.

Return Of Cushings disease in dogs