Cat Diabetes is a chronic condition that, just like in humans, can cause a number of debilitating symptoms and can compromise the overall health and well-being of your pet.

Diabetes in cats, just like humans is defined as a condition that prevents insulin from being properly utilized by the body, preventing the nutrients that your cat eats from being used by the body for a fuel.

Unfortunately, studies have shown that 65% of domestic cats have some form of diabetes and need medication in order to properly manage their conditions.

Left untreated, continuous high blood sugar can cause a range of conditions. 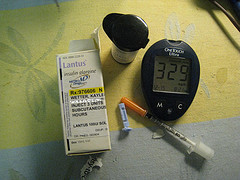 Studies have demonstrated a direct correlation between dietary ta-urine levels and the development of cat diabetes.

Diets that are too low ta urine, a vital nutrients for cats, can lead to development of Cat Diabetes, which require the administration of regular insulin injections in order to manage the disease and it'd associated conditions.

Most experts agree that cats can receive proper amount of ta-urine in their diets if they follow a more natural, high protein, low carbs diet. 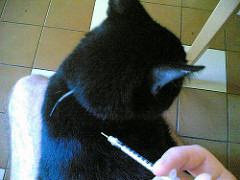 Cat Diabetes is a progressive and usually doesn't appear to the age of seven.

Burmese cats have a higher risk for developing diabetes.

The main cause of diabetes in cats being fed a commercial preparation pet food that doesn't provide a high protein, low carbs diet.

Cats that have developed diabetes that will exhibit classic symptoms of the disease.

First, it will begin to put on weight, become more lethargic. After the disease progress advances, cats will typically began to lose weight of still eating voraciously.

They will also began drinking excessive amounts of water and begin urinating frequently.

This is due to the cats, body attempting to auto regulate the high levels of glucose that are circulating in the blood stream.

Cats who remain untreated for diabetes will began to exhibit additional symptoms that are directly rate related to the damage that is caused to the organ systems by the high levels of glucose in the blood stream.

This includes damage to the liver, kidneys, skin, eyes, and more.

Cats also can develop ketoacidosis, which can be life-threatening side effect of the diabetes disease process. Symptoms of a build up of ketones in the bloodstream. Include a lack of appetite, vomiting and diarrhea.

The study conducted by Dr.Zoran indicates that 8 out 9 cats will benefit from receiving a high protein, low carbs diet.

The study went on to reveal that dry pet food contains 500% to 1000% more carbohydrates in a cats diet that it would consume in the wild.

By providing a more natural diet, cats, become less dependent on the use of externally provided insulin to manage your diabetes. This study show that a healthy diet for cats include;

In addition, diabetes Cats would benefit from receiving increased amounts of exercise as well as variety of herbal supplements. Including fat soluble vitamins such as vitamin E 9 25 to 200IU daily, choromium (500 to 6000 mg daily) and vitamin C (4-160 mg daily.

Along with the herbs I suggested, I also recommend using GlucoEnsure

or simply chick on image to side and browse all your options.