Canine heart worms is a problem that most people are unaware of, nor do they know how dogs actually acquired this disease.

Heart worm disease is spread from dog to dog through the bite of a mosquito.

Heart worm's literally live in the hearts of dogs In advance disease, they may be hundreds of long spaghetti like worms in the heart.

It would take  3 to 5 years to develop this point, and usually progresses a unnoticed, without a test from of from a vet. When it reaches the state that stage, your dog will likely die of heart failure due to the worms.

The maturation process of the heart worm begins when the dog has microscopic larvae in their bloodstream, and it takes 6 to 9 months after the infection.

When the mosquito bites and dog, injustice blood contained in larvae.

It would take two weeks where this latter to develop the ideal condition inside the mosquito. The mosquito then salivates before taking a blood meal from another dog.

After the mosquito bites another dog, who enter the bloodstream and then make its way to the heart and pulmonary arteries. This work. Her 70 days after the infection.

Canine heart worms maturation process from the mosquito and from microfilaria to the L3 stage is extremely dependent on temperature. Laboratory studies have shown that distant development requires a steady 24 hour daily temperature in the access of 60 4F from one month.

Even if the temperature drops below 5 7F for just a few hours, development will be delayed. If the daily 24 hour temperature exceeds 80 F, only 10 to 14 days are required for development from bite to L3 stage. Knowing this information provides insight how did the disease develops to L3 stage.

If you live in hot areas, you need to worry more about your pet. Once the L3 stage is passed from mosquito to dog, it continues to develop through another larval stage (L4), and then into an adult. There , there are alternatives for canine heart worms then using preventive medications, that will create a lot problems later on.

Side Affects Of Ivermectin preventive Medications! 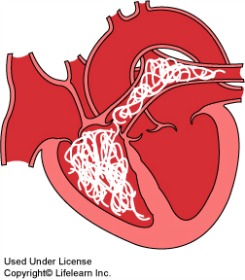 This commonly use heart worm preventive medication can lead to a blood - brain barrier and get into the central nervous system, which can be legal for the animal.

People have found problems in the following breeds.

Signs and symptoms of Ivermectin toxicity!

In dogs, symptoms of mild cases will occur in 48 hours to 96 hours of the drug being administered. In the acute cases, it will appear in 4 to 12 hours time. Such symptoms include.

Loss of appetite ( including anorexia 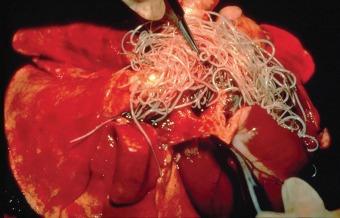 Canine heart worms problem may be dealt with by alternative medicine in much safer way. The conventional vet will tell you that the only thing that will kill heart worm's is using preventive medication, such as Ivermectin.

You must deal with the side effects that occur later on. It will also cause the immune system become weakened, just when your pet needs to fight off disease and allergies that happens along the way.

I have done some research on heart worm preventive medication, although it's only been around since the 80s . Pet owners are not aware that for centuries people use herbs to rid their bodies and those of their pets of parasite problems.

These combinations have proved to be effective against all types of worms!

* Wormwood : Used to cleanse the blood and digestive track!

* Herb of grace; Used for centuries as a parasite cleanser!

Foods to eat to keep fleas away!

In order to best help you ease the problems of parasites, I recommend using Parasite Dr